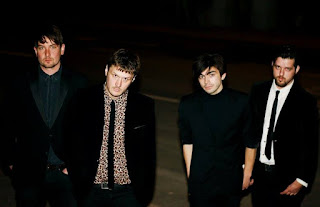 As they take to the road in support of their second album We Paid For Blood we caught up with front man Tom of Dexters before their show at Sheffield Rocking Chair.

The new album We Paid For Blood came out. It's a bit different sounding to the first album, a bit wider variety. Was that a conscious decision?

Yeah definitely. We've grown up a bit since the first album and discovered new influences. We've tried to retain the choruses, the things that people think of as Dexters, but add in different textures around the songs. It's definitely a bit darker, a bit heavier in places and a bit more scope on there, like You Deserve The World is a big song, but then we also like doing the stripped back, more experimental like Your Lovely Wife which is just acoustic and pots and pans and stuff like that.

Were the songs written when you were still touring Shimmer Gold or did you start afresh?

Some of them were being written, I think you can hear which ones, but most of them were written after the tour. Your Lovely Wife was written two days before we went into do the album.

How are the songs sounding live compared to the record given the changes in style?

They're sounding good. There's a livelier feel to them and they're sitting well with the older songs and they've given them a new lease of life with us using effect pedals.

And how have they been going down? It's difficult sometimes to introduce new songs amongst the familiar.

Really well, everyone's got a different favourite which I like. When we meet people after the gigs, they tell us they like that one or another one, there's no one that stands out or asking why we didn't play one song. That's good, although it might be nice to get one big hit, to make us a bit bigger.

Talking about a couple of songs on the album. You mentioned Your Lovely Wife. That has a dark subject matter (a wife poisoning a violent husband) - is that a song that comes from a situation you've observed or something you read about?

No. Luckily I've never grown up in that situation, I know it happens, but it was just something I wrote. I'm very influenced by The Kinks and when people say "Oh yeah, I know The Kinks", they know Lola and You Really Got Me, but don't know the album tracks. There's some weird songs on there, little ditties and narratives, The Coral did that too when they started. I like the idea of writing abstract stories that could be about anything.

That's about not giving up. You've got mates who are in bands who aren't getting where they want so they give up and work in an office.

That bit about not being like the rest, that feels quite pointed.

Yeah, you don't want to be like the rest. Keep being you. If you are a bit weird, a bit nutty, carry on doing that, don't feel like you have to conform to fit in.

And then there's Suburban Sex Dungeon.

(Laughs) Well that's about a Suburban Sex Dungeon, how things aren't always how they seem. It's another Kinks-influenced track lyrically. It's how you shouldn't trust things as they seem, but you have to work them out for yourselves.

The video for it is quite interesting

Are you finding you are having to do more and more for yourselves?

Yes, but that's a good thing. You can find excuses if you're letting something go and someone else does it. It's like the mixing of the album, I was there throughout and I'm really proud of how it turned out. The video's the same, if we do it ourselves and it's shit then it's down to us, but we stand by it.

What are your plans now - you're out on a fairly long tour, are you playing places you haven't been to before?

We haven't yet but we are going to some new towns or places we've been to once. After that we'll have Christmas off and we're going back into the studio to work on an EP to release.  No rest.

Will that be completely new stuff or a song off the album with other tracks?

That's a fairly quick cycle, the debut album came out last year. Are you constantly writing?

There's not a lot else for me to do. I don't tend to write on tour, sit down and write. There's so much to do, interviews, set things up, I do come up with ideas and when we have time off I do try and put them together then.

Do you write all the songs then or is a band effort?

I'll come up with the chords first and the lyrics and then bring it to the band and they make it sound good then. I do the basics and then we work on it together.

Why should someone come and watch Dexters rather than another band?

(Laughs) Because we'll give you a hug afterwards. We leave everything on stage when we're done. People can sense it. Before I was in a band I could see it when a band is going through the motions. When you can be up to playing to a small crowd in somewhere like Stockton as much as you can for the big London gig then I think that makes you a great band.

Sometimes those gigs are better though. People want to be there and bands don't go there.

It's good to take music there, people don't go to those places very often so the crowd are often more appreciative in those towns.

One final question, how far would you like Dexters to go?

I'd be happy to be able to continue to do it - play to people, write records, it'd be nice to have more money obviously, but I'd rather have that, a big continuous body of work that people love rather than one big gig at somewhere like Wembley.

Our review of the Sheffield Rocking Chair show with support by Hidden Charms and Bang Bang Romeo can be found here.

Email ThisBlogThis!Share to TwitterShare to FacebookShare to Pinterest
Labels: Dexters