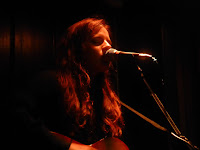 There are moments you watch an artist for the first time and you know they're going to be a star. We first saw Rae Morris back in 2012 in a basement bar in London and knew immediately that she was destined for bigger things. Tonight we witnessed a similar experience when we caught Nottingham's Georgie perform a short six-song set in the intimate surroundings of Manchester's Castle Hotel.

Immediately we're struck by Georgie's voice which has a deep, soulful smoky hue to it.  The depth accentuates the intensity of what's she singing whichever register the song requires and conveys exactly the right emotion to accompany the words. In a room where acoustic acts can often struggle, there's no such worries tonight as she silences a mostly under the influence Halloween crowd who stand transfixed by the rich vivid tones that Georgie creates. 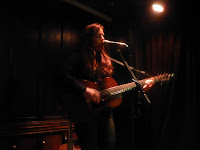 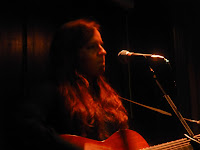 Of course a great voice often needs great songs and the six she performs tonight. She keeps her acoustic accompaniment to her voice simple for the main part, but on songs like her opener Daylight Flood it simply puts her voice into stark contrast as it can dictate the pace, mood and rhythm of the song on its own, whilst it acts as the backbone to Everything I Want which picks at the bones of a broken romance. 20 Mile Road is a story written on a bus, another one of heartbreak "you had my heart and soul and now I'm all alone", a recurring theme in the songs with Georgie's voice laying the emotions bare for all to see. She leaves the best till last, This Ain't Heaven already feels epic in this stripped back form.

She's not lacking a sense of humour or personality either, joking that even though it's Halloween her face isn't that scary and people should come closer and for one with all the pressures of trying to justify the faith of a major record label she's remarkably composed which will stand her in good stead as audiences and venues grow and expectations rise.

We leave thoroughly impressed, we're told that she signed to Columbia earlier in the year and it's no surprise a major label has snapped her up. It's rare to see an audience captivated en masse as this one was by a voice alone, but Georgie has something special that means we're likely to hear a lot more of her in 2016 and beyond.