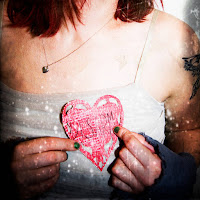 To celebrate the fifth anniversary of her debut LP Disarm, She Makes War, aka Laura Kidd, has revisited five of the songs for an EP release to coincide with a short UK tour. We had a listen to see how Laura had reinterpreted songs five years and over four hundred shows on.

Explaining the rationale for going back and revisiting tracks from her debut, Laura explained the reasoning for what is still an unusual move for an artist despite the endless stream of reissues. As you can tell, it's because Laura cares when she says "As the fifth anniversary of Disarm came closer I started making plans to revisit some of the songs, tenderly reworking the tracks that feel the most resonant to my current self, and the ones I felt would benefit from a different sonic approach. After producing my third album "Direction Of Travel" (out March 2016) I felt it was high time to roll up my sleeves and tackle songs from my debut that never fully realised their potential."


It's clear from the very first note that it's a venture that's destined for success. The five songs she's chosen to rework benefit from the development in Laura's sound over the past five years. Slow Puncture is bursting with sonic ambition and adventure and her voice has never sounded more crystal clear. It has moments of simple instrumentation and at others it feels like an intensely complex web is being created, but the juxtaposition of the two approaches creates something genuinely thrilling.

I Am, a vitriolic rant at an ex, loses none of its fire in its belly and the comfort of distance emphasises the ferocity of the sentiment rather than detracts from it, especially when the chorus explodes in a wall of noise, and again there's all types of instrumentation going on at various points in the song, but without ever feeling like it's cluttering the song up, rather that every note, every word, every harmony is there for a purpose.

No Fireworks is a thing of genuine beauty, strings generating a magical pathos, layered vocals creating an eerily enveloping feeling for the listener, whilst Scared To Capsize, starting with what sounds like a beautiful ukulele and the thunder clap of drums ushering it in, retains the dramatic nature of the original despite the reworking as Laura laments the breakdown of a relationship and the emotional turmoil that accompanies it. There's so much going on, but it feels so perfectly constructed that it never feels cluttered. The final track Ghosts And Shadows is full of tension, created by strings and the haunting intonation on Laura's voice, that reflects where she is today musically as her recent Direction Of Travel album (released via Pledge last year and due a full release next year) shows.

The overriding feeling at the end of the EP is that Laura has succeeded in her objective and, whilst the charm of the originals still shines through clearly, the songs are now far more fleshed out, expansive and ambitious in their scale without losing any of the genuine intimacy that Laura creates with her music.

She Makes War's official site can be found here

She is also on Facebook, Twitter and Bandcamp, where the EP can be purchased in a variety of formats.