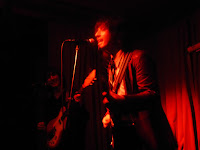 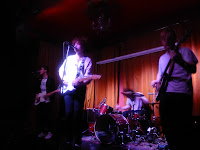 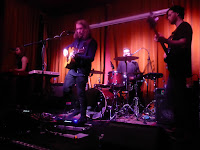 We seem to be blessed with a number of great triple-header bills at the moment and this Monday night combination of Hidden Charms, Viola Beach and Lake Komo is another great example. Three contrasting bands in style and approach they fit together well and all three would appear set for bigger stages than this in 2016.

First up are four-piece Lake Komo, recently signed to Columbia Records and starting to being tipped for big things. The start isn't that auspicious as the sound isn't quite right for the first song as soundcheck had overrun, but once that's sorted out the vastly improved set up at Gullivers provides a perfect setting for them. At their best when three of them are signing together and the delicious harmonies melt into one comforting uplifting wave.

It's easy to see why the label has invested so much faith into them. They'll appeal to those of us that love their laid back style and their ability to create songs like Think Tank, Tides and Milly that manage to both remind us of music we love, but which also has an individual feel to it that has their own personalities running through it. It feels like they're still learning their trade a little but we expect to hear a lot more from them. 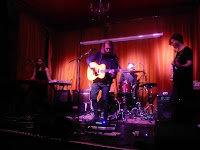 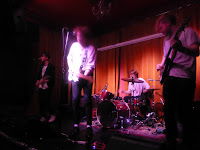 Viola Beach are on the wild side. Their performance is so infectious that it's impossible not to be drawn in if you have an ounce of love of music in your body. They don't take themselves too seriously or strike vacuous poses, their intention is to bowl you over with the sheer weight of enthusiasm and the insistent rampant charm of their songs. There's tinges of Pavement and Vampire Weekend in there, but it's more in that their approach to songs is a little less structured and more free form than many of their contemporaries and that's no bad thing.

Cherry Vimto belies its status as a mere b-side and Go Outside, which we'd marked out as a potential single last time we saw them, firms up its claim to be a set highlight. What's telling though already is that they've got a set that feels very together, coherent and the beginnings of a great debut album. Whilst there's a lot of great bands around at the moment who look and sound cool, Viola Beach don't care, they're here to make us dance and sing along and have a lot of fun and they succeed on every count.

We're almost running out of words to describe Hidden Charms. Every time we see them their grooves seem to be more fluid, their rhythm and their blues tighter and the songs even more unforgettable. Dreaming Of Another Girl and Long Way Down, parts of the year's most potent debut single, are just a taster of what else they have to offer. They start with three songs that run together seamlessly, they interchange instruments at will without every losing coherence and even having time mid set for Oscar to throw the drumsticks to Ranald for an impromptu jam. 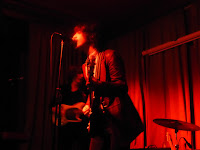 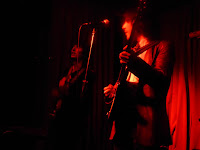 The rest of the set proves that they've got a whole armoury of songs waiting to be unleashed. The unmistakable intro to new single Love You Cause You're There that returns throughout it is one that you won't be able to shift from your brain, and hopefully your radio's airwaves, once you hear it and new song Face In The Crowd has even more impact then set closer Each To Their Own seals the deal before it diverts off on a wild instrumental conclusion to the evening's proceedings.

Hidden Charms are a band with the lot. Like Blossoms, on top of the songs, they appeal to everyone because they have everything - the infectious energy and a genuine love of what they do, the appeal to both young and old, male and female, the love and understanding of great bands of the past and the ability to assimilate this, but not copy it, into what they're creating and a willingness to come and play anywhere to anyone any time as they learn their trade. They're a band to get very excited about.