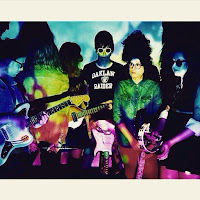 Freakout Honey have made a massive impression in Manchester in the six short months since their debut gig opened up Manchester's Psych Fest. Their live shows have brought them a burgeoning audience, drawn in with the mesmerising collision of seven musical minds in a melting pot, a volatile fusion of noise as well as moments of transcendental calm beauty and sonic exploration.

Garage 222 is from the latter stable, a subtle beautiful loping rhythm that allows Sofia to come across all seductive chanteuse as the music forms a kaleidoscopic whirlpool around her. Its impact is in its understatement, its steadfast refusal to try and knock you off your feet, but to disarm you completely with its captivating innocence until you can't escape from the spell it has cast.

The single is available to download from their Bandcamp page above.