Reverend And The Makers / The Sherlocks - Manchester Ritz - 13th November 2015 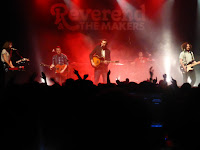 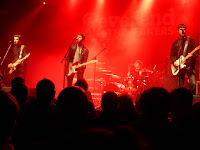 Fifteen hundred people in a room, joined together in one gigantic bouncing frenzy, witnessed Reverend And The Makers triumphant return to Manchester mixing tracks from their career-defining new album Mirrors with songs from their previous four. Support came from Sheffield's very much up and coming The Sherlocks.

The Sherlocks have been gaining an unstoppable momentum over the year. Supporting some well-known older in the tooth bands as well as playing ever bigger shows of their own they have managed to capture the hearts and heads of music fans old and young. We haven't been convinced by them totally the twice we've seen them, thinking they're a bit too close to some of their heroes, but we're always willing to be proved wrong and that's what they did last night.

What The Sherlocks do, and what makes them stand out from the thousands of four-piece group of lads around, is make a connection, a genuine one that has nothing to do with looking cool, acting up or trying to be hard men. They write simple but hugely affecting songs that touch people's basest rawest emotions and feelings in a way that anyone can relate to. When Kiaran sings "How's it feel, was it really worth it" on their opening song,  he could be singing about anything but it'll mean something different to everyone in the room. New single Heart Of Gold, which has had them on regular play on Radio 1, and its huge soaring chorus sets off a huge mosh pit. 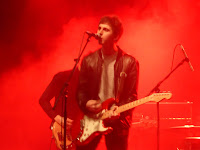 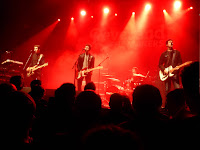 They play a new song Blue that's the undoubted highlight of the set which ponders "got no job, got no money, got the weight of the world on your shoulders" and it touches at the very heart of what it feels to be young, working class and Northern in these troubled times. Escapade touches on similar themes - the cycle of working to go out and get drunk and forget most of what happens on a Friday night. Closing track Chasing Shadows talks to the complexities and insecurities of young relationships with the line "you said you had an early night but I heard you were in town, never off your feet." The people singing them back to them, throwing themselves around the dance floor know that they're talking to them and that's what they've managed to channel and why this time next year they'll be headlining venues like this. 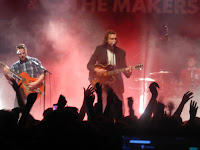 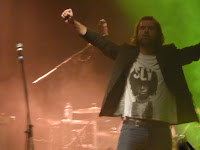 Coming on fashionably late, the rest of the band play the short Amsterdam that starts Mirrors to allow Jon to make his entrance, towel swinging around his head, urging the crowd to bounce which he does regularly throughout the night, once telling us that if we don't bounce to the next song we're a dick. The crowd need no invitation or telling and for an hour and a quarter The Ritz is a seething mass of bodies joined together as one in celebration.

There's no niceties here as they bludgeon their way through the hearts and minds of the crowd - every song a huge powerful statement about how music can move people, whether it be the older, more familiar tracks such as Open Your Window, He Said He Loved Me and the omnipotent rabble-rousing Heavyweight Champion Of The World or the shock of the new with the plethora of material from Mirrors - Black Widow, Babies, Mr Glassalfempty, Ed Cosens' Last To Know and Joe Carnall's Something To Remember - with plenty in between for good measure. Bassline is stripped of a lot of the electronica of the recorded version and feels like a hard as nails rock song whilst Shine A Light and Out Of The Shadows are reminders of why the @Reverend_Makers album resurrected them commercially with big bold belligerent messages that it's impossible to ignore.

Whilst Jon's the focus, his effervescent unrelenting energy inspiring everyone to join in and create a real communal feel from a gig, that's not to underplay the contribution of the rest of the band. They're a phenomenally tight live unit these days and they demonstrate that in no way are Reverend And The Makers a one-man band even with a front man as engaging and charismatic as Jon. 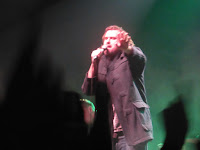 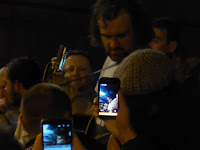 The only respite we get is when the others leave the stage and Jon performs a solo acoustic No Soap In A Dirty Water despite issues with his guitar but after that it's back to the chaos of I Spy and Devil's Radio from their Thirty Two album before the set is closed, in traditional manner, with all fifteen hundred of us singing along Laura's trumpet calling card on Silence Is Talking. Then it's out in the street as Jon plays the Pied Piper and walks under the railway arches to seduce us with an acoustic version of A Message To You Rudy before scarpering back into the venue before the police arrive.

As we disperse into the night singing that trumpet refrain news starts to filter through about the devastating events in Paris where our brothers and sisters were murdered doing what we had just done - watching live music that is a joyful catalyst that brings people together. It needs to keep doing so and those bastards must never win.

Email ThisBlogThis!Share to TwitterShare to FacebookShare to Pinterest
Labels: Reverend And The Makers, The Sherlocks