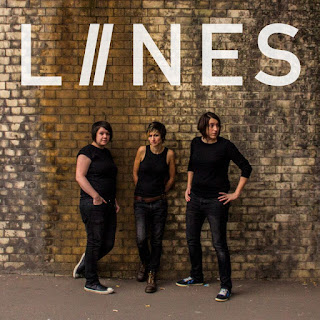 This week's tip on Shell Zenner's show is the fantastic LIINES, a band that we've been championing for most of 2015 since we caught them last December at Gullivers. Chosen by John Kennedy as his Hot One on Tuesday after he read a review we wrote for Louder Than WarAhead of their support slot for Ex Hex at the Ruby Lounge, we caught up with Zoe, Leila and Steph to talk about the release of their new single Never There, how they got together and their plans for 2016.

First of all, tell us a bit about LIINES and how you got together.

Zoe : I've known Steph since primary school. It wasn't that long ago (all laugh)

Steph : We'll take a lie detector test on that later but we won

Zoe : We met at a rock night at The Ritz a few years later and reconnected and started playing together. I met Leila at football, she was very coy about her drumming skills and I thought she was a great footballer but didn't know that she was as good at hammering drums as she was at hammering balls into the net. Then I got drunk and approached her at a gig so she didn't have much choice after that.

Steph and I courted her for a few weeks before she finally agreed to be our drummer.

Leila : I quite like the way Steph joined the band.

Zoe : We had a gig in Madrid and our bassist couldn't play so I asked Steph and she said yes. I only found out after that she couldn't actually play bass and she pretended just to get the trip to Madrid, but absolutely hammered it.

Steph : I could play one song. I was technically lying. It wasn't that I was non-musical.

Zoe : You're making it sound less funny now. She blagged her way in and then proceeded to get everything stolen within an hour of arriving so her passport photo is her taken in a police station in Madrid in the early hours of the morning. It was a memorable trip for a lot of reasons.

You started off as Hooker, but changed your name to LIINES?

Leila : Yes, that was last year. We'd done a bit of recording and decided we wanted to start afresh. We'd written new songs and it felt different.

You're doing a single called Never There.  Can you tell us a little of what it's about?

Zoe : No one's ever asked me to explain a song before.

Leila : You better get used to it, it's a fairly obvious question (all laugh) to be asking.

Zoe : Most songs I write are about heartbreak and loss and mainly about relationships. But it's positive in the end because it's about getting over it and not looking back and realising someone isn't there. It's hard because it just how the song comes out of me. I've never written about he or she, I always make it so people can relate to it.

How do write songs as a band?

Zoe : I generally come up with a skeleton on an acoustic at home and if it gets past that stage then I take it to the band in the studio and we work on it. I figure that if I don't remember it then it's not going to work and I don't revisit them so I've got a phone full of ideas and tiny bits. I've always done that since I was a kid, having ideas for things.

What are your plans next?

Leila : We've got the single coming out in two weeks (23rd November) preceded by a launch party with Scruff Of The Neck at the Night And Day on Saturday 21st. It's our first release so we want to make as much of it as we can. I think the plan then is to record an album as soon as possible next year.

Because it feels like you're ready. You've got enough songs now.

Leila : Definitely and we've got more ideas in the pipeline too. And we want to do what we love most which is playing live. We've got a big festival set up in Munich in May and we'd like to do some shows around that whilst we're there.

Which brings me on to my next question. You have a big following in Germany and Austria, how did that come about?

Steph : It's been a gradual thing. We started off playing Ladyfest events and one-off festivals.

Zoe : Every gig we've played we've built up contacts and there's been lots of people who've been willing to help us out.

Leila : The first time we ever played abroad was in Berlin and La Moustache has helped us out massively and arranged two tours for us. That's just added friends and contacts and it grows that way. There's a guy in Munich called Thomas Leschner who asked us to play there in January which was a big festival there and he's helped us get a festival slot in Austria.

One last question, how would describe LIINES' sound to someone new?

Zoe : The way I describe us more is the energy we put into it. We have a sound that's post-punk, but I talk about how we're intense and energetic and we never give less than 100% even in a soundcheck. We just play until we can't play any more and sometimes that's apparent with the scream at the end of a song.

Zoe : PJ Harvey was the first person that really influenced me. The Rid Of Me album, I learnt songs off that and it made me want to try to write myself. That album.... It inspired me so much to make music.

Tickets are available from this link. There's three other great bands on the bill as well as always at Scruff Of The Neck nights.