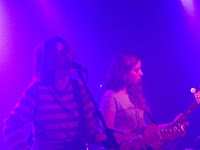 With Hinds acting as trailblazers for new Spanish talent trying to break in the UK, Barcelona's Mourn are looking to try and follow in their footsteps. Our new writer, Starter, caught them at The Lexington in London as they played to an eager and enthusiastic bunch of fans and your average London industry guestlist.

With only one date in the UK it was very surprising to find Mourn walking on stage to a half full room at the Lexington. There was a rapturous welcome from the area in front of the stage which made up for the nonchalant music industry persons who were more interested in talking to each other at the bar.

This soon changed with their opening instrumental intro which has Antonio, the drummer, playing the drums as though they do not have microphones with the rest of the band facing him, backs to the audience playing at the same volume. When the band turn to face the audience and begin their set proper with the new song Evil Dead, it becomes obvious that we are not watching your average bunch of teenagers playing a few songs that have been chucked together in a garage. These teenagers have crafted their songs beautifully and with lyrics that belie not only their age, but the fact that being from Barcelona, English is not even their first language.

They play short, punchy, raw songs that angry punks can dance to and students can sit and analyse in their bedsits. Carla and Jazz, the guitarists, not only take their turns in singing but on some songs, sing the lyrics together perfectly in time creating a pleasant, sophisticated vocal which really shows with the anger on Marshall which came from their first, eponymous album. Even alone, the songs stand out as when Jazz sings the vocal opening to Your Brain Is Made Of Candy, the band bring in their instruments and the song builds up with a feverish crescendo until it ends with a perfect abruptness.

The fourth member of the band, Leia, stands stage centre playing bass like a very young cool Kim Gordon which is quite apt, because when Sonic Youth started out there was a lot of people who could not compare them to other bands or pigeonhole them. Mourn are the same and deserve a great deal more exposure than they are currently receiving.

As I queued to leave I overheard one of the music industry people saying that he might go to a festival in Iceland to show record company support. I would have thought that staying here and promoting them instead of an expenses trip away would help to propel them to the level they deserve.

Email ThisBlogThis!Share to TwitterShare to FacebookShare to Pinterest
Labels: Mourn