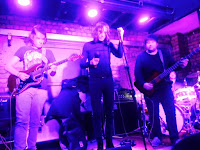 Purple Heart Parade are on a mission. To pummel you to into submission with the sheer volume and depth to their sound. Armed with both old songs and new, we caught them at Salford's Eagle Inn on Sunday night.

They open with a new song Burnerator which starts off slow, guitars gradually building in volume and intensity before exploding into a cacophony of noise, slightly distorted to the ear but which you can feel in your chest such is the ferocious intent of it. It's followed by Moonlight Burn, whose approach is a little more subtle, preferring exhilarating uplifting rhythms to volume to lift the gathered crowd off their feet and leave them spinning.

Front man Pete's in animated form as ever. He's ditched the rolling around on the floor and the more outrageous elements of his performance for something more controlled, more in keeping with the whirlwind that his band create around him and the audience. He does still manage to lose himself in the music to the point where he misjudges the mic stand position and, lost in his own world, crashes his head into it. Fortunately there's no serious damage done so the set can continue.

Next up is Sister Libra ushered him by a dynamic drum beat and guitars and bass that duel and provide an interesting contrast to what's gone before as it gives Pete's vocals space to breathe and to be heard. A second new song Butterfly House is unmistakably Purple Heart, starting off feeling a little claustrophobic before breaking down into a languid dreamy section mid-song to its conclusion.

Starfucker Blues is a bit of a riot, the band at their most fearsome and defiant again, constructing an ever more violent wall of sound starting with that spiralling out of control intro riff and challenging Pete to bulldoze his vocals through the middle as he sings the chorus. The pace is taken down considerably then for Desolation Angel, a beautiful song that shows their mastery and control isn't just reserved for when the volume turned up, it's drenched in emotion and longing. It's not what you'd expect from what's gone before it, but it's beautiful and heart-wrenching.

They took a long time to gel as a band, not helped by regular line-up changes, but the foursome as they stand now, with Ste Woods on bass, Mike Bee on guitar and Keith on drums is by far the strongest they've had. Their final song proves the point - The Room is one of their oldest songs, but it's never sounded close to being this good - full of

Purple Heart Parade writing some stellar new material that they're revealing to us slowly, but for now they're quickly enforcing their reputation as one of the most ferocious, direct and sonically challenging bands on the Manchester circuit.