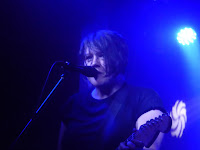 The Night And Day is rammed.  Right to the back. And the atmosphere is feverish and expectant. It's time for LIINES to deliver on the buzz that's grown steadily into a hum and unleashed itself as a full-blown roar as the likes of John Kennedy of Radio X and Louder Than War have fallen under their ferocious spell.

And deliver they do. This is their night, no more third on the bill at the Ruby Lounge, no more being asked on a bill that's not selling well to get their growing local support involved, this is LIINES selling out the Night And Day on their own back by word of mouth, with their forthcoming single Never There finding itself onto radio stations across the country by dint of its ferocious three minute assault.

Nervous as hell coming on, they take what seems like an age to set up and then thirty seconds into a barnstorming opening to Yes, Again the bass amp packs in. Rather than throw them, it dissipates any nerves and they start again. By the end of the song the whole place is won over, bowled over by the sheer intensity of what they've just witnessed. This is the rawest close to the knuckle rock and roll you'll hear, but then there's a change of pace, a shattered shard of melody poking through or a hammer-like guitar riff.  Alligator starts with a drum salvo you can dance to. And you can dance to this. And you should. I Almost Miss You is underpinned by a riff and a bass line that are both perfectly simple yet unmeasurably powerful in their intent. There's a section mid-song that you could imagine thousands of hands raised singing back to them.

It's all well and good having two or three songs that form the base for a set, but LIINES have a dozen or so, ready for a perfect debut album that we'll hopefully see in 2016. Whilst only possessing guitar, bass and drums might be a limiting factor for lesser bands, it's not here. Each and every two to three minute piece has a life and personality of its own although their parentage is unmistakable.

Quite how they get through the set is a wonder. It's baking hot down the front, as all the best gigs should be, not helped by a lighting rig that feels like it's been borrowed from Wembley Arena. It does its job though because it provides a stunning visual backdrop and atmosphere that's perfect for what LIINES are doing up on stage. 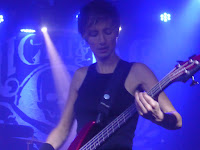 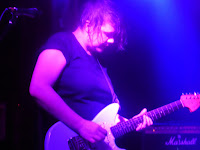 The end part of the set is jam-packed full of potential singles, songs that have an irresistible force that it's impossible to resist. Liar is delivered with a destructive anger that makes you fear for the song's protagonist, whilst Be Here is more expansive, propelled by a dictatorial drum beat and scarred by a bass line that cuts through you whilst Cold is possibly the pick of the lot.

Things turn back to the hard side for Blackout and Part Of You, but the search for melody, for a connection with their audience either through words or music is never compromised in the search for power and volume. They finish their main set with their new single Never There which is out on Monday and it's even more thrilling, on-the-edge, in-your-face live than it is on record.

There's no way the crowd are going to let them go that easily though, the roar at the end could probably be heard the other end of Oldham Street and they return, seemingly taken back by the adulating overwhelming response they've had, and play Gone, all throbbing threatening guitar and bass and like so many of their best songs packing so many different sections into such a small space of time. They indulge us all by playing the single again. We wouldn't normally approve of such shenanigans but tonight they could play it ten times and we wouldn't care.

Tonight is an absolute triumph, the sort of night that restores your faith that great music will find a way to its audience. LIINES don't play by any rules, they're not cool, they don't try to be, there's no posturing, demanding that you love them. They get up and they play these songs that pummel your senses into submission then place a warm blanket around your shoulders and then they leave. The fact the venue is full and the response they get both during and after the set tell their own story.