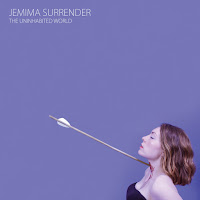 Jemima Surrender's debut album is a furiously infectious piece of work from the Bristol three-piece. Rammed to the brim with hooks that it's impossible not to be bowled over by the immediacy and directness of their sound and find yourself fascinated by and immersed in an album that doesn't quite play by the conventional rules.

There's no one in Jemima Surrender called Jemima (they are Millie, Andrew and Adam), they describe themselves as music by girls for girls (although two-thirds of the band are male) and the cover depicts an image of an arrow piercing Millie's throat - that's enough to give you an idea of just how fabulously weird this record is in parts when it's not charming you with its beautiful melodies and sudden changes in direction and pace.

Hammer And Peg sets the tone that the rest of the record follows. Millie muses about "crying over spilt milk, left to mop up the guilt of all the loose women that went before me" and the theme of relationships is one that's explored at various junctures as the album progresses. Sylvia starts with a dramatic sounding verse before a completely contrasting chorus led by what sounds like a xylophone before it veers off into a section partly sung in French. Confusing? Yes, but it's also brilliant.

The theme is set for the rest of the record. Lead track Or Anyone talks of setting fire to people in the garden and not being someone's muse before ascending into a section that you'll find yourself silently singing along to the harmony of before it drops back down. There's so many ideas in this record, in individual songs, that it's a miracle that it doesn't collapse under the weight of them.

Something Awful talks of day release and being dangerous by washing dishes whilst Gentlemen Jerk contains possibly the most remarkable line we'll hear in a song all year "I'm sorry I did not wish you Happy Birthday, I didn't know where I was for a while, but that's OK we can throw a dinner party with some mussels because you know I love them deeply, who the fuck says that in a Facebook message after three months of no contact." There are no punches pulled throughout, both lyrically and musically.

The Uninhabited World is an album that demands your attention. Without it you'll find it impossible to keep up with the stories that unravel in every song. Rapid changes of mood and pace help to tell the stories as guitar pile in to emphasise impending chaos whilst everything drops down at points to create an eerie slightly threatening mystery. Jemima Surrender's world might be uninhabited, but it's a strange one.