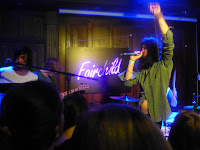 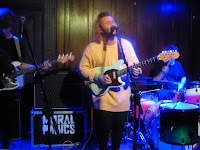 We'd heard a lot of great things about Fairchild so were intrigued to see what the Australian six-piece could deliver live at The Castle and we witnessed that tiny room dancing and bouncing like never before as they compelled us all to have as a good a time as they were. We were also mightily impressed by Moral Panics who preceded them.

This was Moral Panics' first gig since relocating from their native Stoke to Manchester. The room's already packed by the time they come on, with their singer Dan Johnson dressed in a warm-looking yellow jumper that doesn't feel too wise in the heat pit that The Castle becomes. They launch into an early single called February and they have us hooked already. They're not afraid of sounding big and manage it without any sign of bombast or treading over into predictability, partly because of Dan's effervescent jack-in-a-box style that seems him out in the audience later in the set walking around amongst us and also because of their desire for songs not to stand still, to be continually moving in a way that encourages their audience to do similarly.

Calidore from their recent Ataraxia EP particularly stands out with Dan making full use of a second set of drums to create a frightening wall of sound, but one that's totally in fitting with their intent. They play a new song called I Don't Want To that's equally impressive before their new single (who's title we don't catch) that should help to build their following in their adopted city further. As the set concludes their final song sees Dan makes his way out into the crowd again before decamping to that extra drum for a frightening middle eight before everything comes back to a soaring chorus that leaves us all a little punch drunk. 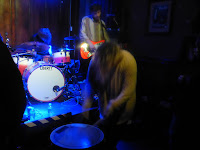 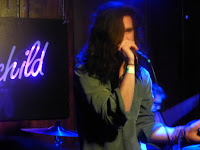 That's a hard act for Fairchild to follow, but they have no such concerns. Quite how six of them squeeze on to The Castle's stage is an achievement in itself, but it never feels like a restriction, partly because front man Adam isn't on the stage half the time, preferring to roam amongst us, challenging us to dance and ending up the gig close to needing oxygen and shirtless. And that we do, save for an oblivious couple who've pushed their way to the front, The Castle's dance floor creaking and groaning under the weight like we've never felt it before. Fairchild make this tiny room feel huge, they play the gig as if they're playing a big arena and it's pretty damn near impossible not to be drawn in.

And the music? Well it's a whole mixed bag of beautiful danceable rhythm, funk and soul that feels for these forty minutes like the most perfect wired pop music on the planet. The song titles are almost irrelevant - although they do play recent single Hot Rod and that along with the last song they play So Long, before they're forced by the audience that won't let them out until they do to play an encore, particularly stand out. Fairchild appear to have taken the admirable stance that the one way that their audience is guaranteed to have a great time is if they have one themselves. There's no one quite like them around at the moment, their vibe is infectious and in your face and you're powerless to resist them when they play a gig like this.