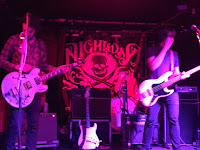 Hey Bulldog are creating quite a stir around Manchester at the moment. Even The Stars' latest recruit Liam Hart caught them at the Night And Day Cafe as part of This Feeling's monthly club night and they left a lasting impression on him.

Without showing a hint of bias, Manchester is the music capital of the United Kingdom. A short walk down Oldham Street takes us briefly out of a psychedelic Gullivers (review of Astral Elevator's latest night to follow this week) to This Feeling’s premier rock and roll themed club night at Night and Day Cafe. Where else on the world can you walk from one quality music venue to another within shouting distance of one another, and watch some of the best and brightest musicians in the country all for under the cost of a couple of pints?

I made this trip to Night and Day specifically to see Hey Bulldog, knowing full well that I would miss The Strawberries at Gullivers. Apologies to The Strawberries, I did listen to you guys before I came out and I did like what I heard, but in circumstances like these, sacrifices had to be made. I shall make up for it.

Anyhow, surviving the wind and the rain we arrived just in time to see Hey Bulldog. Opening with a punchy new track, the crowd are taken by surprise as the short sharp burst of energy awakens the room. As the opener dies down, Rob’s guitar reverberates into the iconic opening of Making Friends Not Millionaires. This track in particular stands out. It is a quintessential rock n roll song from a proper rock n roll band. It has everything from a catchy and effervescent guitar riff, to screeching guitars and vocals from Rob, to the fuzzy and determined bass from Matt and the never ending drum rolls and fills from the equally brilliant Ben. Nothing is out of place here, everything is measured perfectly and conducted with sheer perfection.

Technically, Hey Bulldog are second to none. At times I find myself staring endlessly into the intricate fingering techniques which both guitar and bass player do equally as well. However, this is not Hey Bulldog showing off, they are simply masters of their instruments and this is just another day at the office for them. Between the three of them, so much noise is made, yet each instrument is easily distinguished and clearly defined in each song. Those of us who like to pick a wall of sound out brick by brick will enjoy figuring out how each one of their songs is created. Like watching a master painter create his Pièce de résistance, I suddenly feel like a student watching the existing musical conventions be redefined before my eyes.

Their latest single Under My Spell is also showcased today. I purposely didn't listen to it before coming to the show tonight because I wanted to be surprised. Surprised I was, in a year since the release of the Numb EP, Hey Bulldog have really defined themselves and are making a huge push for further success. I wish them the very best of luck; I love this band.

The single is available on CD and digital from their Bandcamp page.