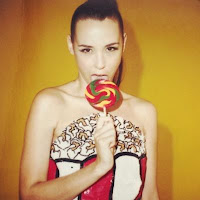 Findlay's been away for a while. One of our top three tips for 2015 she's been away freeing herself from a mire of record label machinations, but she's back to close out the year with a stunning new track and an equally eye-catching video called Junk Food.

The video tells its own story as the song deals with society's attitudes to junk food and the get-rich culture and damn the consequences that pervades in the industry - or in her words "The video is a satire of the food, diet and beauty industry, with the banned protein world advert being the main point of inspiration to mock the societal pressures we all face to look a certain way, consume a certain way and turn a blind eye the negative impacts our behaviour has on each other and the planet."

We have high hopes for Findlay in 2016 that it will finally be the year she can make the breakthrough she so richly deserves after a series of thrilling singles - Your Sister, Off And On, Greasy Love and Wolf Back - and her always enthralling live shows.