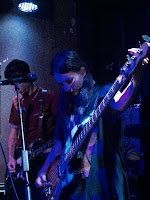 There’s no better way to enjoy a bleak winters evening than in a pub, serving real ale, that’s hosting two live bands for the miserly sum of just £7, well that’s just what The Castle Hotel on Oldham Street in the City’s thriving Northern Quarter rustled up on Monday evening for me and the rest of an eternally grateful hot and sweaty crowd.

The opening slot was given to Caesar a four piece guitar driven band brought together in Manchester but from various parts of the country. Their three song set was brief, but very strong, their closing song Hazy was a somewhat Radiohead-styled tune, that ended in a brilliant crescendo of swirling guitars driven by rhythmic a drum beat that left you wanting more. Keep an eye out for this lot locally as they pack one hell of a punch.

Top of the bill was the multi-talented Eliot Sumner (formerly I Blame Coco) whose musical talent shows no boundaries as she grows into one of the country's up-and-coming rising stars.

The daughter of Sting she may be, but this 25 year old is determined to go it her own way in the music business and be known for all the right reasons as a multi-talented musician/singer songwriter, although with a voice very similar to her father's, the odd comparison will always be made.

The UK leg of this tour to plug her bands upcoming album Information due out in January 2016 opened up in Manchester last night on the back of a 28-date North American tour, that will be quickly followed by a European one starting next week.

She and her band entered a very tightly packed stage shortly after 9.15pm and for the next hour, they gave me and everybody else in the packed out sauna like room at the back of the building a show to remember.

Opening up with the album's opening track Dead Arms & Dead Legs, the ten song set flowed like a dream, with her heavy bass playing fully complemented by a band of experienced musicians driven by a far heavier indie type of synthesizer sound than in her early days as I Blame Coco.

The set continued with Firewood, a former single and another track off the album, which has a nice hint of Kraftwerk mixed in to a haunting type of backing vocal. Next up was yet another single and album track, the brilliantly crafted I Followed You Back Home which sweeps the crowd up off its feet and takes it up another level.

Let My Love Lie On Your Life is an up tempo tune which builds itself up nicely into a weighty frenzy at the end, this leads on to the next number and former single After Dark which relies heavily on the synthesizer/keyboards sound and a melodic hook.

Next up was Halfway To Hell, one of the highlights of the set, a song that starts up with an early 70’s Glam Rock beat and sways into a late 70’s, early 80’s New Wave sound at its conclusion.

Wobbler was next up, a B-side of the Information EP. I can’t help but love this song, its slower beat and hollowing vocals make this a must own track. She then threw a brilliant cover by San Diego band Crocodiles into the mix All My Hate & My Hexes Are For You and followed it up with crowd favourite Come Friday which made an already sweaty crowd melt further into Eliot’s stunning music.

Last, but by no means least, was the forthcoming album title track ‘Information’ a song that ended the set perfectly, building up throughout its seven minutes entirety into a crashing wallowing sound of noise, perfectly complimented by Eliot flowing locks in full head banging mode to the final beats of a memorable night.

If you’ve not caught her live yet in a small intimate venue, make sure you do so before time runs out, the masses catch on and she rockets to the stardom she and her band so richly deserve.

Eliot Sumner and her band played Dead Arms & Dead Legs, Firewood, I Followed You Back Home, Let My Love Lie On Your Life, After Dark, Halfway To Hell, Wobbler, All My Hate & My Hexes Are For You (Crocodiles Cover), Come Friday and Information.