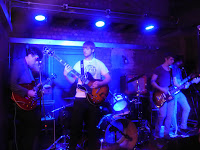 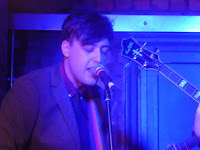 Control Of The Going are one of our most exciting discoveries of 2015. At the start of the year they were a studio project, it wasn't until July that they played their first gig, but now they're regulars on the Manchester gig scene, drawing a full room to open up Astral Elevator's latest night at the cosy Eagle Inn in Salford as they tour the city's venues revealing new songs and new sides to them with every show.

On a stage so small that keyboard player Minesh is forced to set up his kit on the floor of the venue, Control Of The Going's set tonight is a mix of their two EPs Epilepsy Bus Ride and Wild Flower as well as new songs they're prepping for release. They even add in another new song Day By Day, a song that retains their unique inimitable charm whilst distinguishing itself from the rest of the set as all the songs do so that they never sound the same.

Being a six-piece there's a lot going on both on as well as off stage tonight. Soaring keyboards, powerful but understated guitars, bass and drums that the songs hang themselves around and front man Liam's unmistakable and unique vocal style. Unlike so many bands sitting under the psyche banner there's separation in their sound though, there's no overwhelming the audience with sheer volume or collision of sounds, it's more subtle, more intense and perfect for you to lose yourself in the music.

War Crime is a big song that builds slowly before dropping into an insistent "I'm guilty as charged, our love is war crime" before attacking his tambourine as if it had spilt built beer down his nice new shirt. Day By Day starts with a big bold drum beat that ushers in a menacing keyboard line and an intriguing vocal. They're new songs and they tell the tale of a band that's got a insatiable creative streak running through it (see their Soundcloud page if you don't believe me), but for now it's still The Message, which Liam tells us is his Mum's favourite song (and Mums are always right), that stands out the most. It has a spiralling repetitive riff to it that you will find yourself humming along to at the most inopportune of moments and losing yourself in dance to as the song spins its way into your affections although its fellow EP track Reflection runs it a close second. 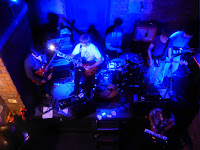 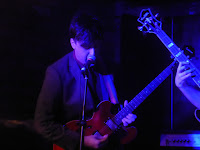 They close with Don't Let The Sun Down, the song that probably most justifies their classification as psyche, which comes more from their own love of the likes of Brian Jonestown, The Lucid Dream and Purple Heart Parade than it does their own sound. It's a magnificent seven minutes that starts off modest and unassuming before it heads skyward, sees them expand their horizons and leave us heads spinning and wanting more.

Control Of The Going are one of the fascinating bands on the Manchester live scene at the moment, linked in with bands that they themselves love by dint of that fact, but you sense there's something truly spectacular just beneath the surface when they truly let go that will blow apart even their most impressive of starts.

They play AATMA on Saturday November 14th and support Brahma Loka at the Night And Day Cafe on December 18th.