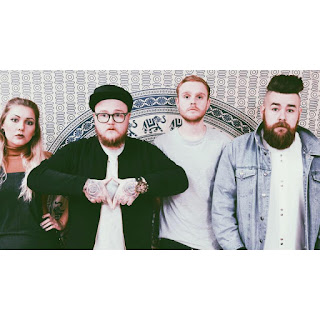 The Lottery Winners have been around for a few years now and we have a soft spot for them at Even The Stars. Always entertaining live and with an ability to forge killer hook after killer hook fused with intelligent and often humorous lyrics they've slowly but surely built themselves a growing fan base. As they plan to release their debut EP via Pledge Music we spoke to drummer Joe who was pretending to be singer Thom.

For those that don’t know you, could you introduce The Lottery Winners and give us a brief potted history.

We’re a four-piece indie pop band from Leigh in Lancashire. We’ve been together for about seven years now with one slight line-up change in that time. Over those years we’ve played hundreds of gigs around the UK building our very loyal fan base that we are very proud and grateful of.

You recently released a rather brilliant lyric video for your latest track Pillows that had you falling in love with Ed Sheeran before he mutates into Mick Hucknall. Where did that idea come from?

I have a pretty weird imagination. For the official video we have an Ed Sheeran lookalike who gets kidnapped and taken hostage by a crazed fan. (Yes, another strange idea). We decided that we’d tease with this lyric video, which we coincided with the release of the Ed Sheeran film. It’s had loads of views and I’m proud of the positive reaction we’ve received for it. Keep your eyes out for the official video being released in the next few weeks!

You’re currently running a Pledge campaign to release your first EP. It’s been a long time coming, what’s taken so long to get to this point?

We decided to do a Pledge campaign as it was a good opportunity to get our fans involved as it gave them the chance to buy personalized gifts from the band. We smashed our target within the opening week, which we were delighted with. It has been a while in the making, but it was to ensure that we are all very happy and proud of the tunes that are going to be on the EP.

So, what can we expect from the EP? Will it be completely new songs or will we recognize some of them from live shows or previous songs you’ve teased us with?

Our EP is going consist of five carefully selected songs. One of the tracks will be an upcoming single called ‘Young Love’ that we’ve been playing at live shows for the last year or so. As for the others, you’ll just have to wait and see!

Are there plans for an album after that? You’d probably have enough songs now given the shows we’ve seen.

Yes, of course. We’d love to record an album! We’ve got loads and loads of songs that we can’t wait for everyone to hear. Once we’ve released our EP, who knows what will happen?

You’re going on tour with The Wonder Stuff and The Wedding Present to add to the list of amazing acts you’ve played with. Who has been your favourite and is there anyone you’d still like to play with?

We were all buzzing when Miles Hunt (the lead singer of The Wonder Stuff) asked us to come on tour with them. We’ve played with them before at a festival a few years back so it’s pleasing that we had a lasting effect on them. We’ve supported so many bands in the last few years but I’d have to say a stand out one for me was supporting Madness at Silverstone this summer. Hearing 10,000 people singing back the songs that I wrote in my bedroom is pretty special.

We also supported Catfish and the Bottlemen at Night & Day Café in Manchester a couple of years back. I’d say this was the last gig they played before they blew up into the massive band they are today. They’re a great bunch of lads and an unbelievable band to watch live.

Your live shows are very different to your recorded sound in that you encourage audience participation more than most bands and play around with your songs. Do you think bands have an obligation to entertain as well as just play songs?

Definitely! When people spend their hard earned money on coming to our gig, it’s up to us to entertain them! I always get the crowd to sing along to our songs, mainly because it makes me feel like Freddie Mercury.

If you had to describe The Lottery Winners to someone who’d never heard you before, where would you start?

In the past we’ve been described as a mix between The Smiths and The Beach Boys, which is amazing for me as they’re my two favourite bands. We’re an indie pop band with catchy choruses and good riffs and our live shows are great fun.