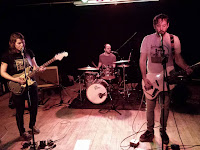 From a little hidden corner of Edinburgh, Stuart Ralston witnessed Mammoth Penguins, Violet Woods and Plastic Animals deliver a night of quality music to a packed and appreciative audience.

The Wee Red Bar takes some finding. Tucked away in the Edinburgh College of Art, an exciting three band bill opens with locally based Plastic Animals. They've been plying their trade for so long that their singer suggests we check out their MySpace page! Playing an upbeat set, they sound like a glorious mix of Pavement and Teenage Fan Club. They even have an fx man, Jean-Michelle, to assist in creating their glorious wall of sound. The bass player creates endless bouncing baselines throughout the thirty minute set and it is a wonder why they don't have a bigger profile.

Next up are Violet Woods. Their self titled LP made our end of the year poll last year and is a well crafted piece of pop. Tonight's set features most of it, lovingly recreated.  The psychedelic tinged Over The Ground gets the set underway. Singer / guitarist Xavier impressively plays a 12 string through a vintage Vox amp throughout their set whilst bassist Mark features in the Mammoth Penguins line up later on this evening.

Over The Ground is a fine opener to the set, benefitting from an extended jam at the end. Electric Fascination is more incendiary than on record - the instrumental section builds and builds over several minutes. The band seem to be a new proposition for the audience with their appreciation growing after every song. There’s a versatility to Violet Woods as demonstrated by the country tinged Here. The Dancer is dominated Laura’s 60’s influenced organ. Closing the set with The River sees the band firing on all cylinders. Xavier goes all out to create as much feedback as possible. Violet Woods have won over many new fans in the now packed venue.

Headliners Mammoth Penguins came to my attention just a few weeks ago, thanks to Steve Lamacq’s afternoon show. I swiftly picked up a copy of their debut LP Hide and Seek. Tonight’s 30 minute set is drawn heavily from it as the trio deliver a show packed with three minute pop nuggets.

Hermit gets the set underway and it is clear from the off what a great band Mammoth Penguins are - like the best three piece bands, they seem at complete ease with each other throughout the set. Bassist Mark adopts a completely different style from that demonstrated in his other band. Singer / guitarist Emma delivers sharp, autobiographical lyrics before they launch into the infectious Cries At The Movies. Strength In My Legs is even better. A bold start from Mammoth Penguins - three of their finest moments opening the show - and they barely pause for breath.

Played sees all three members chip in and compete on vocals. Chewing Gum is slightly punkier than their other numbers. We Won’t Go There and March of The Penguins allow the band to deviate slightly and feature extended instrumental sections.  Put It All On You didn't make it onto the debut album but should have. It features some Beach Boys-esque vocals and is a real highlight of the set. When I Was Your Age brings the set to a close, a song written in response to a comment from Emma’s grandad.

Mammoth Penguins are a real breath of fresh air. They seem to have the same ethic as bands like Stereolab. Let's hope they go on to produce as big a back catalogue. We look forward to seeing them again soon.