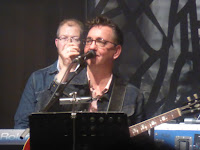 There's something magical about Richard Hawley. Seven albums into his career, each one reinventing himself without ever diluting the fine songwriter blood that runs through his veins. He understands what makes great music and carves rather than crafts songs both in the studio and live. A rapt Albert Hall fell under his spell as he played tracks from his latest album Hollow Meadows as well as selected highlights from that immense back catalogue.

Of the fifteen songs played tonight, six come from Hollow Meadows and five from its predecessor Standing At The Sky's Edge and the mix of the two is a potent one from the quieter more considered tracks such as What Love Means and Tuesday PM of the former compared to the powerful euphoric guitar epiphanies of Time Will Bring You Winter and the title track of the latter, but what they both do is confirm Hawley and his band's absolute mastery of the live show. The songs don't just sound like performances of the recorded versions, but feel like reinventions, reassessments, true to the original but enhanced, given space to breath free from the limitations of the studio. The Albert Hall is perfect for this as the sound cannons around the Wesleyan chapel and the audience is spellbound in utterly respectful silence in the quieter moments and awestruck when the five of them take flight and let loose a cacophony of controlled destruction. 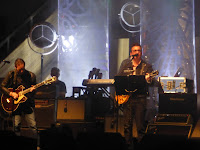 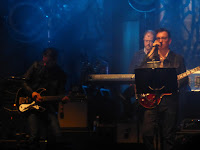 It's the older material that's welcomed the most at the start - Open Up Your Door, Tonight The Streets Are Ours, Coles Corner and The Ocean are the four oldest songs and the ones that get the bigger calls of recognition, but at the end of each song the reception is less discernible than for anything else around them. What they do show is that however much Hawley may change the angle at which he approaches his songs the underlying fundamental approach to his songwriting hasn't changed one bit. Everything is there for a purpose, there's no superfluous moments, nothing there for shows. Songs build from subtle calm beginnings into a whirlpool, huge walls of sound usher in others and there's moments of pure unashamed pop-tinged melancholia. And then there's his voice, like a constant throughout, warm, reassuring and having lived and breathed the words he's imparting to us. His Sheffield twang is evident in the quieter moments, but it's soothing and adds to the impact rather than coarse, yet it's strong enough to hold its weight when the guitars are turned up.

Of course there's more to the show than just Richard. His long-term cohort Shez Sheridan adds so much to the songs, both in their creation as well as their live performance as do the rest of the band including the drummer who's continuing through a bout of shingles.

There's a lot of love in the room tonight, Richard's even forgiven a shocking joke about Manchester being the only place other than Las Vegas that you can pay for sex with chips. You suspect he told the same joke with the place name interchanged in Leeds the night before, but no one minds because it's Richard Hawley. You watch him on stage and you see how he's influenced Sheffield's younger bands today in look, style and approach to making music. He might not have quite enjoyed the success and acclaim of his contemporaries such as Garvey or Cocker as he doesn't have their showman tendencies, but that doesn't mean that Richard Hawley isn't a national treasure as well as being one of the finest musicians and lyricists of his generation and he's continuing to deliver album after album, tour after tour.

Richard Hawley played Which Way, Tonight The Streets Are Ours, Standing At The Sky's Edge, I Still Want You, Leave Your Body Behind You, Sometimes I Feel, Open Up Your Door, Tuesday PM, Time Will Bring You Winter, Down In The Woods, Don't Stare At The Sun, Heart Of Oak, There's A Storm Comin', Coles Corner, What Love Means and The Ocean.