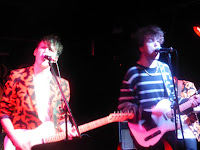 Viola Beach have just been announced as the third band on the sure to be legendary Blossoms and The Vryll Society tour next February and March. We caught up with the Warrington four-piece as they battled with the living dead at This Feeling's monthly club night at the Night And Day Cafe in Manchester and left impressed.

Even though they're very early into their life as band, Viola Beach are a remarkably tight live unit, their cascading rippling rhythms echoing the finer parts of Vampire Weekend's catalogue in parts but with their own personalities strewn over it. Within the tight rhythmic drum patterns, the rest of their sound comes across as remarkably fluid and full of energy.

They sing about boys and girls. Opener Boys That Sing tells of learning to sing to impress the chosen one and b-side Cherry Vimto belies that status with an insistent request to "stay with me." Go Outside bears all the hallmarks of a future single with an angular yet accessible radio-friendly approach and a breakdown section that's made for a more attentive audience to sing back to them whilst Like A Fool is a riotous romp with a thrilling guitar line coursing throughout it and Drunk and Call You Up follow in a similar vein, high-energy songs that jump between a range of ideas and styles seamlessly and the sum of them being greater than the parts. 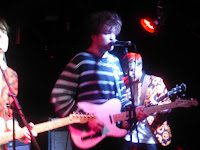 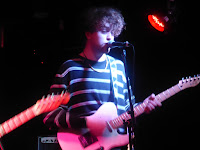 They finish with their recent debut single Swings And Waterslides, the first calling card of a band that's destined to make a significant impact in 2016 and it's reassuring to note that it doesn't stand out from the rest of the set as band's debut singles often do, a sign that they're here to last rather than to crash and burn. Viola Beach look and sound the part, from the energetic exhortations of front man Kris and drummer Jack to the more studied cool of bassist Tomas and guitarist River.

Viola Beach played Boys That Sing, Cherry Vimto, Go Outside, Like A Fool, Drunk, Call You Up, Swings And Waterslides.