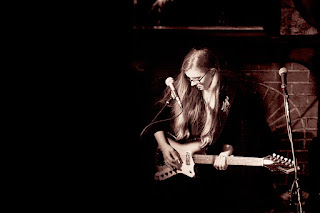 To coincide with the vinyl release of Vindication Blues we spoke to Ivy Rossiter, aka Luckless, from her ongoing European tour about life on the road for a New Zealand based artist, the art of selecting an album tracklisting and her plans for a UK December tour.

First of all, could you introduce Luckless?

Luckless is my project, Ivy Rossiter, from New Zealand; sometimes it also includes the skills of Logan Compain on drums, Rob Collins on bass, and Ben Eldridge on guitars - but I tried to fold them up into my suitcase to bring them to Europe and they wouldn’t fit.

You come from New Zealand - what is the music scene like there?

I think New Zealand really punches above its weight when it comes to the quality of music being produced from our trio of tiny islands.  There is just about every kind of music you can imagine being created locally, to very high standards.  However there is only so much audience to go around, so some sounds and styles, some artists and labels, gain more recognition than others, just because of the disparity between supply and demand.  I think that’s why so many creative New Zealanders end up overseas, either to tour or to relocate themselves; it can be hugely rewarding to discover a larger, diverse audience for what you make.

You're in the middle of a huge set of European dates - how does it feel to be playing so far from home?

I’m very fortunate in that most of the venues that host my shows are very hospitable, and go out of their way to make me feel comfortable and at home.  Especially in Germany, the welcome is nearly always warm and friendly, and audiences are incredibly attentive and open minded.  That helps stave off loneliness or homesickness, as I end up with new friends just about everywhere I go.

That being said, there’s something very comforting in walking into a familiar venue; it will take some time to make friends on my touring circuit here the way I have at home.

Are there plans for any more UK dates in the near future?

There's a lot of songs that reference travel in some form or other on Vindication Blues.  Do you write songs from personal experiences or observations of those around you?

It’s hard to pinpoint exactly where songs come from… Some start from a personal experience, some come from other songs or books or lines of conversation. Some come from other people’s lives and adventures, but while the initial inspiration may start at a particular point, often the songs themselves wander so far from that starting place that you don’t end up with a direct line from the start to the end.

Often I end up post-rationalising my songs days or weeks or months after they’ve been finished, deciding that they’re about something completely other than what I originally intended.  I like that songs can be so mutable and fragile - the same way that the albums of other artists that I love mean different things to me at different times in my life.

The album has a lot of changes of pace - take Dry Eyes into Cities Of Salt then Paperskin and All I Want To Sleep - was this intentional in the choice of tracklisting and what inspired you to order it that way?

We spent a lot of time building up a track listing of the album that seemed to work and to pull the listener through.  It wasn’t intentional to have dramatic changes of pace, but instead transitions that seemed to move from one to another in a natural way.

For those that have never heard of Luckless, how would you describe your music?

Luckless is a sometime-band, sometime-solo-project, that plays songs floating somewhere in the netherworld existing between alt-rock and indie-folk.

Vindication Blues is available now on CD and download from Luckless's Bandcamp and on vinyl from label Beautiful Strange's Bandcamp.