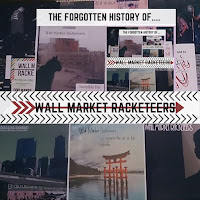 The Forgotten History Of The Wall Market Racketeers is the debut album from one of the most intriguing bands on the Manchester scene at present. It mixes reworked versions of tracks from their previous EPs and singles as well as new songs.

When we reviewed The Wall Market Racketeers' debut EP Invisible Ink last year we commented on their ability to both sound minimalist but to have intricate detail in their songs and their debut album continues that theme even though most of the songs we know have been revisited.

For those familiar with them the subject matter won't surprise, but for those not they don't write about girls and going out, their concerns are far more serious matters. Firesale! for example is searing indictment of the Murdoch empire that starts with front man Alex telling us "There was an old joke in Soviet Russia that there were two newspapers, one called Pravda which means truth and one called Izvestia which means news. There was no news in Pravda and no truth in Izvestia. The jokes on us as there's neither in anything you can read today" before aiming his targets at the stories that they fabricate to push their agenda. They name check Kevin Carter and you can hear that dissenting revolutionary spirit throughout the whole album that the Manics had when they were generation terrorists before everything had to go. Closing track Weltscherz is less direct in its finger-pointing, but no less in its intent.

That's a marker for the rest of the album. The intensity of The Forgotten History Of makes it a record that's difficult to digest on one listen, but one that's ultimately worth the effort. It's not something to listen to on the bus or whilst you're making the tea, it's for a dark reflective moment with something strong in a glass. The song titles themselves - Cognitive Dissonance, There Is A Hole In My Coat Where The Wind Is Getting In, The Insiders The Outsiders And Me - tell a story.

The production on the record feels very claustrophobic, but intentionally so. The intensely lo-fi approach to tracks like One Way Trip To The Shoreline with the vocals up in the mix accentuate the fact that this is no ordinary band approaching their debut record with the aim of getting rich and famous. It's a record that's seeking connections, like-minded souls who want their music to give them more than a verse, a simple hook and a huge sing-along chorus. Songs don't have a constant theme to them, there's all manner of interesting effects on tracks like Chronostasis and the rerecorded Cognitive Dissonance.

Our stand out track The Fix keeps returning to a simple yet haunting piano lines throughout and an extended one at its conclusion and sparse guitar running loose in the distance as Alex tells us "they got nothing we need and they can't make us care, we made the choice to submit, to be complicit" before putting forward "how about this time we resist, how about we fix it?"

Wall Market Racketeers are a unique entity, a band that's fiercely proud of what they're creating and oblivious to any requirements to create something to mass market. They operate on the basis that they'll create something that feels natural to them, talks about things close to their heart and minds, articulating their own views on the world and see what happens. On The Forgotten History Of they create a compelling record that'll be loved by those that come into contact with it and give it the time and space to investigate its complex musical and lyrical themes.

The Forgotten History is available as a pay-what-you like download (no minimum price) and a limited run of 50 CDs (minimum price £3.50 plus £1.50 postage) from their Bandcamp page. They will donate one Canadian dollar for each purchase to Desert Bus, the longest running internet fundraiser - you can find more details about them here.