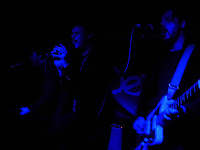 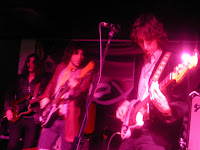 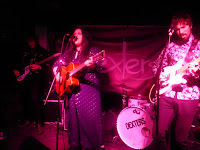 With possibly the best three band line-up we've witnessed this year, Dexters' tour in support of their brilliant second album We Paid For Blood hit Sheffield's Rocking Chair on Saturday night with Hidden Charms and Bang Bang Romeo in tow.  Three very different bands in style and approach, they worked together to produce a night that will live long in the memory.

Bang Bang Romeo are on home territory and there's already a substantial part of the sold-out crowd in the venue by the time they take to the stage. Their soulful take on rock is focused around Anastasia's voice which, combined with her captivating energetic stage presence only at times hampered by an acoustic guitar, stops any chattering in its tracks. It's deep, dark and menacing on the rampant Revolver and threatening on the set closer Invitation, soft, delicate and evocative when they slow things down mid-set on Chemical.

They're not afraid to aim big with their sound. Guitars and drums collide and create a fierce almighty cacophony that it takes a voice of Anastasia's calibre not to be overwhelmed by. They dispense with their single Johannesburg second up as if a statement to say there's much more where that came from, and there is. They've built a formidable set of songs over the past couple of years and developed into an unmissable live band. 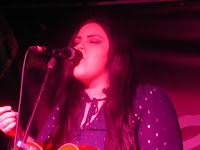 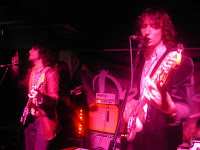 The same can be said for Hidden Charms who convince us even more each time we see them that they should be huge. They make being in a band come across so effortless, as if creating these songs with such insistent delirious and delicious hooks and delivering with a panache and style that oozes cool and unaffected was the easiest, most natural thing in the world. They interchange instruments and lead vocals throughout, they nod respectfully to some classic rock influences but they twist and turn them and infuse them with their own mark, their personalities coursing through each and every song.

Their debut single Dreaming Of Another Girl should already have whet your appetite, but it's a mere hors d'ouevre for what's to come. It's b-side Long Way Down arguably outdoes it, particularly in the live environment and their forthcoming second single Love You Cos You're There should be the one that gets them on all the 2016 tip lists. However, there's plenty more in this set that will ensure their upward trajectory continues rapidly. They unveil a new song, which we think is called Face In The Crowd, that might just be their best yet whilst set-closer Into The Zone is set to become a huge live favourite. There feels like there's an unstoppable wave lifting Hidden Charms at the moment that's going to flood your defences. You need to see them now in these venues before they break.

That's the gauntlet thrown down for Dexters, but one which they accept with relish. In our interview with front man Tom before the show, he tells us that they leave everything on stage at the end of their set and immediately in the opener The Wolves you see what he means. This is a band that doesn't believe in doing things in half measures and is brimming with a confidence that borders on but doesn't trip over into arrogance. They're harder, rougher and more in your face live than on the record with the addition of a second guitarist. 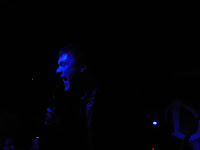 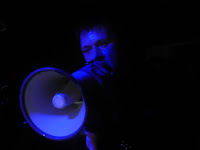 They mix songs from their debut Shimmer Gold and the recent follow-up We Paid For Blood. They still have the rabble-rousing community-forming anthems that first brought them to our attention such as Cloudfest and Recover, but, as you'd expect, the focus is on the new album. It's an album that in parts stays true to their debut on the likes of These Days Were Made For Us and Borderline, but the likes of new single Surburban Sex Dungeon and Your Lovely Wife show a different side to Dexters, but one that fits perfectly into this set, creating variety and balance. The former becomes a riotous blast with Tom screaming the chorus line through a wall of guitars whilst on the latter he uses a megaphone for the verses which tell the tale of a wife poisoning her violent husband and the chorus that sees the audience bizarrely singing along to "open up wide, swallow the cyanide."

Borderline is probably our favourite track of the night, a big soaring anthem with a huge thrilling chorus and rumbustious whilst the fabulously titled Braggarts Regatta, which asks the question "when they say your heart's in the right place, what does that mean anyway" jumps from a high-pitched vocal to a scream without drawing breath. The concluding Stay Strange is an anthem for the times though, a call to arms, to retain individuality when everything around you demands conformity. It's Dexters' anthem because underneath that laddish exterior that's had them unfairly lumped together with bands with smart clothes but little to say, they're far more than that. The title track of We Paid For Blood is, Tom tells us, about his father being made redundant after twenty years in a job, and is a searing political and social commentary.

A band most at home in the live environment Dexters are a band that throw everything into their performance, there's a telepathic connection there that comes with being mates and growing up in a band together and a desire not just to give the audience a good time but to have one themselves. They succeed in every respect.