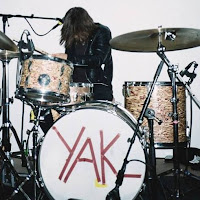 Yak may only be two EPs into their career, but they've already built up a reputation as a stunning live band and are amassing a growing following. Our South Coast reporter Starter went along to their Brighton show at The Prince Albert and came away confirming that the rumours were true

I first came across Yak at Field Day in London when I was walking between stages. They were playing in a tent and as I walked past I liked what I heard so I wandered in. I only managed to catch their last three songs, but that was enough to know that I had to check them out again.

That was nearly six months ago, but tonight is the chance to see them again that I have been waiting for. With only two EPs released their reputation is already building which can be seen by the size of the audience and the expectation of the audience is noticeable.

The band arrive to no fanfare, but are warmly received. The stage is set with the normal set up for a three piece, but with the addition of a keyboard at almost a vertical angle between the drums and guitarist. It is almost as though someone was unable to buy four legs in the same length and this will suffice. It is this keyboard which is used to start the gig with the opening song Harbour the Feeling. It is a beautiful drone coming from the keyboard that sounds just like a Hammond organ. This is slowly added to, one at a time by drums, bass, guitar and finally the vocals of Oli Burslam as the song builds. This is rock music at its best, there is a repetition in each part of the song, but like master craftsmen, the song will move on long before you tire of it. From this song they move effortlessly into Hungry Heart which was their debut single, with its angry chorus of “again, again, again, again’.

During each song in their set you can feel the influences of Can, The Doors, Black Sabbath, The Stooges and The Rolling Stones. In fact, Oli Burslam has the guitar playing of Keith Richards, but with the singing ability of Mick Jagger. In the song Smile, I am sure that I also heard Dick Dale battling to free himself through the amplifiers. Burslam thanked everyone from the stage and said that it was a “novelty that people want to see us”. Yak will have to get used to this novelty as can be seen not only by the turnout, but the Wednesday, school night moshpit.

The set finished with a speeded up version of Plastic People after which it was obvious that there would be no encore thanks to the scattering of the drum kit to all four corners of the stage. This is rock at its best, pure and dirty.

Email ThisBlogThis!Share to TwitterShare to FacebookShare to Pinterest
Labels: Yak